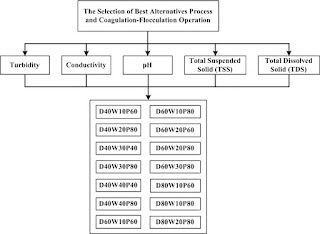 Fig. 1. The Decision Hierarchy
Based on the Fig. 1, the decision hierarchy structure was obtained by the following information: (i) the research objective was the selection of the best alternative of coagulation-flocculation process and operation; (ii) criteria were measurable parameters for water quality such as turbidity, conductivity, pH, TSS and TDS; (iii) the alternative was a combination of coagulation-flocculation processes and operations such as %dose (D) i.e 20/40/60/80%; residence time (W) i.e 10/20/30/40 min and agitator cycle i.e 40/60/80 rpm.
The Application of MCDA Method. The MCDA method is an alternative selection process method for obtaining the optimal solution of some decision alternatives by taking criteria or objectives that are more than one in conflicting situations into account [5]. In this paper, the AHP method and AHP-TOPSIS approach were proposed. The AHP method is measurement theory with pairwaise comparisons and is based on expert decisions to arrange the priority scale [8]. In solving multicriteria problems, the AHP method was used to obtain priority based on the decision maker's preference assessment by pairwise comparison representing the essential ability of humans to develop their perceptions gradually, comparing a pair of equivalent solutions to the given criteria [9]. In the AHP method, a relative scale of interest with a Saaty scale of 1-9 was used and performed by expert judgment. The form of the calculation of this method was the decision matrix and system consistency ratio (CR) involving component consistency index (CI) and random index (RI) was used in the consistency calculation. Calculations  was performed using the Eq. 1 and the Eq. 2.

The AHP method is generally used extensively by previous researchers such as the selection of the optimal technology to rehabilitate the pipes in water distribution system [10], application for reinforcement of hydropower strategy [11]. The AHP method according to previous researchers lacks in the ranking system so that the combination with other MCDA methods is required for the improvement of one of TOPSIS [12]. Although TOPSIS uses the concept of a popular and simple method, it often gets input because of its inability in providing space for an uncertainty and perception for decision makers [13]. To overcome this deficiency, we used a combined AHP-TOPSIS method with principle of using expert judgment perception in uncertainty criteria assessment. Previous research for this method were selection of development projects for oilfields [7], and selection of sustainable supplier countries for the steel industry [14]. TOPSIS proposed by Hwang and Yoon (1981) used to determine the positive ideal solution and the negative ideal solution. The best alternative selection was the data that had the shortest distance from the positive ideal solution and the furthest distance from the ideal negative solution [15]. Here are the steps of the AHP-TOPSIS method [16].
Step 1. Compiling a normalized decision matrix

Step 2. Arranging the weight of the normalized decision matrix

Step 4. Calculating the Euclidean distance between the positive and negative ideal solutions for each variable

Step 5. Calculating the relative closeness to a positive ideal solution for each alternative

Results and Discussion
Criteria Weighting. The criteria selected were based on standard steam power plant manuals book and studies that had been conducted by previous researchers [1, 2, 3]. The criteria weighting was proposed using AHP method approach with decision maker by expert judgment according to qualification which had been determined because this method was commonly used by previous researcher and its simple calculation [2]. The criteria weighting scoring system was performed by expert judgment using a pairwise scale system of Saaty 1-9 and continued by calculating it using expert choice v11 (EC 11) software assistance to obtain the criteria weight as shown in Fig. 2

Fig. 2. Criteria Weight by Expert Judgment using EC 11 Software
Based on the expert's judgment, turbidity criteria had the highest priority ranking followed by TSS, while other criteria such as conductivity, TDS and pH were determined to have less effect on water quality.
Priority Ranking Selection
Approach of AHP Method. The AHP method in this paper was proposed and used for the determination of criteria weighting and priority ranking determination to select the best process and operation of coagulation-flocculation due to the simplicity and easy calculation based on expert judgment assessment. Initial stages of data to be calculated in this paper was the scoring process with reference assessment in accordance with the provisions set by the expert judgment in his knowledge in the water treatment system of the steam power plant. The results data are presented in Table 4.
Table 4. Decision Alternative Matrix by AHP Method Approach
(a)    Criteria Weight
The alternative decision matrix with the scoring system were arrenged and presented, then it was subsequently calculated to determine the priority ranking using the EC 11 software. The result data could be seen in Fig. 3.